Third-party devs make Twitter and Tumblr better, yet get pooped on. Why?

Several months ago, Tumblr users who had a browser extensions called “The Missing e” installed loaded up their dashboards and came across this message: 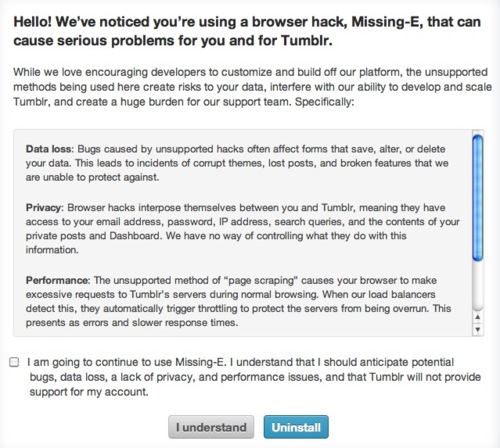 The message uses a lot of scary words — browser hack, privacy, data loss — meant to rattle the less clueful. Then it presents users with a silly choice: uninstall the ‘hack’ right now or forfeit any Tumblr support for any reason forever.

The reactions to this message amongst my friends can be summed up as: LOL son, but no.

Most of the people I run with are not only tech-savvy, but also wary any time a company tries to use scare language to coerce behavior. And this is a classic example.

The dev behind The Missing e refuted all of Tumblr’s claims at the time and, as far as I know, many people continue to use the extension to this day. I know I do. The reason being that TMe makes using Tumblr tons easier. And with every update the extension gets better and better.

The sad thing about the bitch fight between Tumblr and The Missing e is that Tumbr should have hired that dev to find a way to integrate all of those features into the platform in a way that did not put a burden on performance and does not call for an extra download.

Tumblr’s continued insistence that TMe was the devil, as were all those using it, just made the company look like a whiny baby angry that someone on the outside made their service better without their input.

When I look at what Twitter is doing to third-party apps and developers, I see a very similar situation.

I can understand why Twitter wants more people to use their service through their website and their apps instead of other folks’ when the issue of monetization comes up. But the main reason why so many people use Twitter via apps and portals and such is because the company’s apps suck, as does their website.

Even if I didn’t have four different accounts to maintain, I would still use services like HootSuite and apps like TweetCaster on a regular basis. Those apps give me options Twitter doesn’t, like keeping my lists in a column, scheduling tweets, and easily accessing the keywords I want to keep track of.

Every time I try to use the Twitter app for Android I force close it in frustration. And having to deal with Twitter.com to find something — like the thread of a conversation — is just tedious.

Instead of fighting against devs and being petulant about how many people are accessing Twitter through third-party services, why not invite devs to be your partners, help you make better apps, and smooth out the experience on the web side?

What ever happened to the old adage, If You Can’t Beat ‘Em, Employ Them? 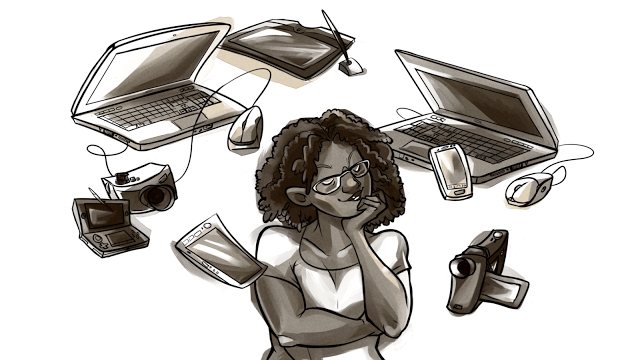