The Best Podcast App for Android

Last week Google announced that their podcasting app, Google Listen, will soon be kaput. For those out there that use the app this is sad news. (Personally, I never liked Listen.) If you’re looking for a replacement or trying to find a good Android podcatcher in general, you should check out DoggCatcher. 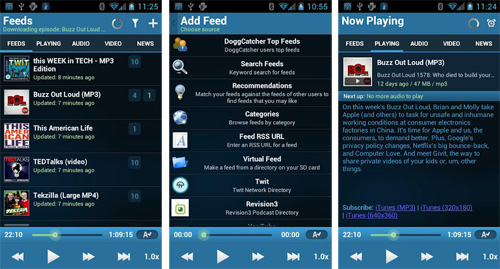 DoggCatcher isn’t free like Google Listen. And $4.99 is on the expensive side for an Android app. It’s worth the price thanks to a long list of features and settings, including full (and customizable) automation of podcast maintenance duties.

The top reason why I settled on DoggCatcher after an annoying search for a podcast app for Android is the automation. Once I subscribe to a feed I never have to worry about whether the app downloaded the latest episode. It does so automatically, checking for new items at an interval the user can set. I don’t want to have to force an update since I often go to listen to podcasts when I’m not connected (such as on the train). Whenever I do new episodes are there.

For those of you who’d rather stream podcasts than take up space on your device, that option is available, too. Users can also customize how many episodes to keep and will delete old files to save space.

There are dozens of settings that govern what DoggCatcher does with podcast media files from how often they’re downloaded, when to delete them, whether to download over mobile broadband or not, and even whether to keep files even if they’ve been deleted from the podcast server.

Another feature I love is the ability to create podcast playlists. I find this useful in the shower — I can listen to several short podcasts in a row without having to touch my phone.

Adding podcasts to DoggCatcher is easy. Users can import their Google Listen subscriptions as well as adding by search, category browse, or feed URL. The app also collects together certain highly sought-after podcasts in groups, such as BBC, NPR and TWiT casts.

The discovery bit on the app could be a little better, but is there. It’s better if you already know which podcasts you want to listen to, though.

DoggCatcher will download and play both audio and video podcasts.

The only con to this app is that it doesn’t have much eye-candy. The user interface is straightforward instead of being super pretty with tiles or attractively designed podcasts pages and other things you’ll find in apps like Stitcher Radio. This is a minor issue, obviously.

Due to all it does and how well it works for me — I’ve used the app across four Android phones and tablets with no stability issues — I recommend DoggCatcher to anyone looking for a good podcasting app. It’s well worth the $4.99 price.

Stitcher Radio is one of the more popular podcasting apps, possibly due to all the advertising they do in podcasts. I’m not a fan of the app since you can’t listen or watch podcasts and video casts when offline.

For those who always listen to podcasts when connected to the Internet, this is not a big problem. However, even when I drive I’d rather listen to local media than stream since streaming uses up data. People on limited data plans don’t want to waste megabytes on something they should be able to download when connected to Wi-Fi.

Other than that, Stitcher is a fine app for exploring and discovering podcasts. I like that the app will recommend new podcasts based on what you already listen to. Plus, Stitcher does a good job of curating podcast content.

If content discovery is more important to you than saving the media locally, then Stitcher is an excellent free alternative.

← On Liliputing: Google’s beta culture infecting the hardware side of the business
Do you care if your phone gets the latest Android OS? →